The number systems used in Computer Science are often referred to as Base 16, Base 10, Base 8, or Base 2.

The number base specifies how many digits are used (Including Zero) and how much each digit is multiplied by as it is moved from right to left. 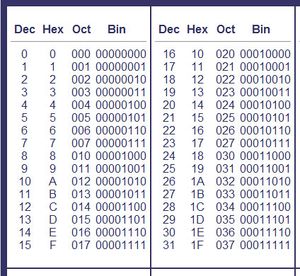 Also sometimes referred to as the Decimal number system, the Denary number system uses the digits 0-9 which means there are 10 possible digits.

If we go beyond the digit 9 in denary another column is used; i.e the ‘tens’ column or the ‘Hundreds’ Column.

The first column, the one on the far right, s 10 to the power 0. For each subsequent column the power is increased by 1.

The Binary number system is an essential system as all digital content is stored using binary, Binary is the base 2 number system. Unlike other systems binary uses only two different digits 0 and 1 to represent any given number. 0 is represented as 0, and 1 is represented as 1 and just like the decimal system if the value exceeds 1 an additional column is needed. As binary is in base 2 it uses twos instead of tens which the decimal system uses. So for example 10 would translate to 8 plus 0 plus 2 plus 0 and would read 1010. The Zeros are present to show the columns 2² and 2° The first column on the far right is 2 to the power 0, for each subsequent column the power is increased by 1. 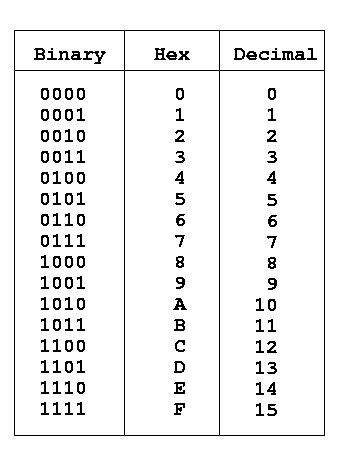 The first column on the far right is 16 to the power 0 for each subsequent column the power is increased by 1.